You are here: Home » News » GLOBAL HOT NEWS » The United States will force WeTChat and TikTok to be delisted and executed on September 20! ByteDance, Tencent, China's Ministry of Commerce responded

The United States will force WeTChat and TikTok to be delisted and executed on September 20! ByteDance, Tencent, China's Ministry of Commerce responded

The United States will force WeChat and TikTok to be delisted and executed on September 20! ByteDance, Tencent, China's Ministry of Commerce responded 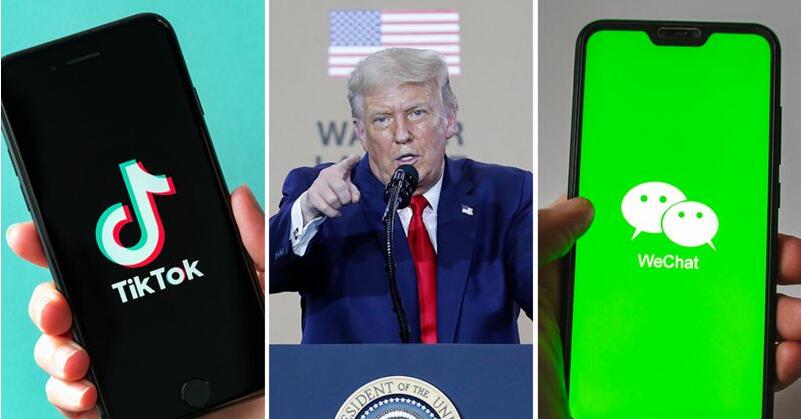 The U.S. Department of Commerce issued a statement on Friday stating that beginning September 20, U.S. companies will be prohibited from conducting business transactions with WeChat (WeChat US version) and TikTok (TikTok US version).

US Secretary of Commerce Wilbur Ross stated in a statement that although WeChat and TikTok pose different threats, they are similar. Both programs collect large amounts of data from users, including network activity, location data, and Internet browsing and search history. This leads to an unacceptable risk to the national security of the United States when American users use WeChat and TikTok.

In the statement, the vague "prohibition of related transactions" in the previous White House administrative ban has also been specifically described, including the prohibition of the following actions from September 20, 2020:

1. Download or update WeChat and TikTok through the US mobile application store;

2. Any service of transfer or payment processing provided by WeChat in the United States;

For WeChat from September 20, 2020, and for TikTok from November 12, 2020, the following transactions are prohibited:

1. Provide any Internet hosting services to enable the two programs to run and optimize;

3. Provide any Internet transmission or peer-to-peer services directly contracted or arranged with the United States, so that the two programs can be operated and optimized;

4. Use mobile application code, functions or services in software or services developed or accessible within the United States.

The US Department of Commerce's statement also claimed that any other prohibited sex transactions related to WeChat or TikTok may be discovered at some future date. If the U.S. government determines that the illegal activities of WeChat or TikTok have been copied in some way by other applications outside the scope of these executive orders, the President has the right to consider whether additional orders may be required to resolve such activities. Prior to this, US President Trump has issued an ultimatum that the national security issues caused by TikTok must be resolved before November 12.

But the U.S. Department of Commerce did not block TikTok's back road. The statement stated that if TikTok can resolve issues related to US national security before November 12, this ban can be lifted.

US President Trump said on the 18th local time that he expected the deal with TikTok to be concluded soon to ease the so-called "security" concerns of the US government.

"I think this (transaction) will be concluded soon, and we have a great company to talk to us about it," Trump also claimed that we will not do anything that endangers safety. The report mentioned that just a few hours before he made this statement, the US government ordered the prohibition of downloading TikTok from the 20th local time.

TikTok response: opposed to the US Department of Commerce's decision to continue to advance the lawsuit against the US Executive Order

In response to the U.S. Department of Commerce's decision to prohibit TikTok from downloading and updating app stores in the U.S. from this Sunday, and to prohibit TikTok from providing services in the U.S. from November 12, TikTok responded that we oppose this decision and this Deeply disappointed. Hundreds of millions of American users have formed a community that loves TikTok, because TikTok brings them happiness, allows them to express themselves and connect with others. TikTok is committed to protecting the privacy and safety of users, bringing laughter to people, and helping platform creators develop meaningful careers.

The TikTok proposal promises to make efforts in transparency and accountability, including third-party auditing, code security verification, and allowing the US government to monitor the security of US user data. In addition, the US technology provider will be responsible for data storage, maintenance and compliance of TikTok US users.

The previous executive order issued by the US government without due process may deprive the American people and small businesses of an important platform for their voice and survival. To this end, TikTok will continue to insist on litigation to safeguard the legitimate rights and interests of users, creators, partners and the company.

Tencent responds to the decision of the US Department of Commerce: multiple rounds of communication, but no consensus

The statement also said: "WeChat has always complied with local laws and regulations, and its data policies and procedures comply with the world's strictest privacy standards." "During this period, we have conducted multiple rounds of communication with the US government to find a proper solution. Unfortunately, The two sides have not reached a consensus." "We will continue to communicate with the US government to strive for a long-term solution."

Answer: We have noticed relevant actions by the US. The United States banned related transactions with the mobile applications WeChat and TikTok on the grounds of "national security", seriously damaging the legitimate rights and interests of relevant companies and disrupting normal market order. China firmly opposes this.

Without evidence, the US has repeatedly used national power to "hunt" and suppress the above two companies for unwarranted reasons, seriously disrupting the normal business activities of the companies and damaging the confidence of international investors in the US investment environment. , Undermining the normal international economic and trade order.

China urges the US to abandon bullying, immediately stop wrongdoing, and earnestly maintain fair and transparent international rules and order. If the US insists on going its own way, China will take necessary measures to resolutely safeguard the legitimate rights and interests of Chinese companies.