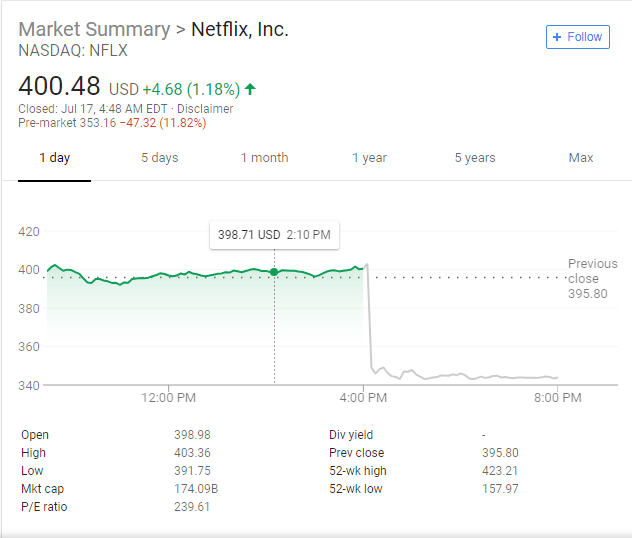 Netflix shares erased two months worth of stock gains after saying that it added about 5.2 million users in the second-quarter—a healthy increase in itself, yet significantly below what analysts had been forecasting. The company added 670,000 new subscribers in the US, compared with the 1.2 million forecast. International subscribers grew by 4.5 million, also below the 5.1 million consensus figure.

Adding to investor concerns, Netflix warned that it expected to add 5 million customers this quarter, which is not only below Wall Street forecasts, but also a slower pace than what Netflix saw a year ago.

Netflix has long been a volatile stock before the earnings report, its share price had doubled in value since the beginning of 2018. Much of that rise came from a growing confidence among investors that the company’s seemingly flawless execution on its growth plans would continue.

The subscriptions figures were especially disappointing considering that Netflix had been consistently adding more new subscribers than expected for several quarters running. Netflix’s stock had risen between 2% and 14% following its earnings report in the previous four quarters.

More than revenue or profit figures, Netflix investors look to the new-subscriptions metric as an indicator of its overall health, given that it shows whether the company’s aggressive investments in new programming are continuing to bring in a bigger audience.

Netflix is projected to spend between 12 billion and $13 billion on original programming this year, significantly more than any of its rivals. In some ways, that kind of spending has paid off. Netflix received 112 Emmy nominations last week, surpassing HBO in the number of nominations for the first time.

But for last quarter at least, that spending didn’t yield any new must-view programs like the breakout hit Stranger Things. Without enough hits like that, Netflix runs the risk of signing up fewer new subscribers or of losing them to other streaming rivals such as Amazon Prime Video or HBO.

Netflix revenue rose by 40% to $3.9 billion, roughly in line with analyst forecasts. Its net income rose to 85 cents a share, above the 79 cents Wall Street had been expecting.